Quick father/son trip to Midland earlier this week in order to gauge leading edge frac and drilling activity as well as E&P sentiment.   Here are our takeaways.

Frac Activity.  The current Permian completion count, we believe, remains steady with local contacts reporting ~50 fleets operating.  Of this amount, an estimated 30-35 are believed to be dedicated with the balance performing short-term spot work.  In the coming weeks, multiple E&P’s are believed to pick up as many as 5-10 fleets, although we suspect the net number could be lower as some existing spot work will conclude.  We did not sense a material uplift in completion activity would occur anytime soon.  Neither did we sense a sharp pullback either.

Frac Observations.  One private E&P who will be picking up a spot crew told us it will have to wait a few weeks due to lack of availability.  Its provider does not want to reactivate equipment for short-term work.  Makes sense as we see no reason to incur costs to reactivate equipment if such equipment is not poised to generate any profit.  Pricing meanwhile still remains terrible.  One contact reports per stage pricing on a recent bid at $6,800.  This frac company claims its competitor is using PPP funds to underwrite the discount.  If true, not the best strategy.  We’ve heard this strategy being employed in well servicing, but not pressure pumping.  Here’s another example of a bad pricing strategy.  A fluid end provider is openly quoting fluid ends on social media for $28,000 as long as supplies last.  Feels like a last ditch effort to generate cash.

Frac Asset Sale.  Recently, one private company sold its 25-30 pumps to another private frac company.  The price is attractive to the buyer.  Mixed emotions for us on this deal.  From the positive perspective, the buyer got a good price; we’re not at liberty to disclose transaction terms.  The assets, we believe, are in working condition and preparing to go out.  What irks us, however, is the assets had largely been idle in recent quarters and not being quoted, thus we classified them as stacked.  This transaction now breathes fresh life into the equipment.  Assets which were once not being marketed are now added to the industry marketed supply – this makes it incremental from a marketed perspective.  The one blessing, however, is the assets did not go to a new entrant, but rather to an incumbent.

Final Frac Observations.  Observation #1: OFS is a tough business and one with high risk.  We learned of multiple pumps which purportedly caught fire on location this past weekend.  Not sure the cause of the fire, but this is an expensive loss to the company.  Presumably and hopefully, the equipment was insured.  Most companies don’t budget for events such as this.  Nor do they price services to account for these type of anomalies, but we know anomalies happen.  Therefore, it is important the industry price its service accordingly in order to generate a sufficient return when these type of one-off events occur.

Observation #2: There is growing chatter about the use of gas gensets to power frac fleets. This is an emerging theme which could yield new electric fleet designs, thus it is a story we are digging into.  The question of power ownership is still being debated, but the need for greener fleets will ultimately drive this transition.  Moreover, the genset concept would reduce the call on turbines and/or traditional frac engines.  Our dialogue on this topic is admittedly limited at this point, but our gut tells us this could be a transformational catalyst for the industry.  Therefore, we are analyzing this theme and will publish our initial high level takeaways in the coming days.  That said, E&P contacts with whom we visited are intrigued by the concept with some having already been pitched the idea.  Several want to learn more about the technology.  Therefore, as we plan our OEM tours to learn more, we’ll happily let E&P and/or frac friends tag along.  Simply let us know your interest.  Separately, we are happy to organize a tour for any interested E&P’s who want to independently meet those OEMs developing the next generation frac fleet / power supply designs.  Again, just let us know.  We make this offer/suggestion as we believe this emerging concept is worth paying attention too.

E&P Sentiment = Cautious.  Fall borrowing base redetermination season is rapidly approaching, making several private contacts nervous. Virtually all E&P contacts anticipate banks taking a harder stance.  While the redetermination process is not a new event, the proximity to reduced liquidity and potentially a need to repay debt likely leads some private E&P’s to refrain from ramping activity.  Here are a couple E&P observations.

By way of background, we believe the redetermination process kicks off on September 15th.  That’s when most E&P’s will submit financials and reserve reports to their respective bank group.  The banks will then make a borrowing base determination around November 1st.  One E&P contact expressed concern about the lack of visibility into the upcoming redetermination process.  The E&P believes banks will use a mid-$30’s price point which will yield a reduced borrowing base.  Meanwhile, sentiment among the banks is extremely negative.  Most lenders want out of energy and are trying to reduce commitments.  This negative sentiment, along with a potentially low price deck, does not bode well, keeping some E&P’s in a “blackbox” as it relates to the path forward.  Moreover, many banks are purportedly frustrated with the PE and E&P community.  They question the differences between what buyers will pay for the reserves vs. what the banks have historically used to lend against them.  For example, we are told some buyers want to value/purchase reserves at PV15 with no credit for PUD’s.  Banks, meanwhile, have typically set RBL calculations using advance rates on PV9 for both PDP and PUDs (or something similar).  We are sure there is an element of variability amongst buyers of assets, thus our simplistic example is a one-off.  Nevertheless, we conceptually agree with the banks premise to lend against a similar value deemed reasonable by those who buy/sell the underlying assets.

One E&P executive described his situation. The company does not presently have much liquidity.  If the company were able to maintain its current line of credit, it would likely add activity in 2021 via FCF directed to the drillbit.  However, if the line of credit is reduced, this will cause debt to come due.  The company does not envision banks demanding the debt be repaid immediately, but an amortization program would need to be created.  That obligation, however, would likely eliminate capex plans as cash would instead need to towards debt reduction.  In theory, this means the company would spend below maintenance capex levels which means it slowly works itself out of business, all else being equal.  This situation could be avoided if private equity sponsors inject more capital, but it’s telling they haven’t done so yet.  Other E&P’s with whom we visited express similar concerns which makes our 2021 activity forecast a tad too optimistic – more later.

In an effort to be glass-half full, we try to see potential benefits of the current crisis.  Here’s a working theory.  An event which causes a substantial amount of E&P players to spend below maintenance capex in 2021 could potentially yield a more bullish macro oil environment in 2022.  Specifically, if banks take a harder line and credit is curtailed, then activity is flat-to-down still.  If this occurs and if well-capitalized E&P’s do not increase activity,  one could assume a production response occurs.  As a good friend likes to say, the decline curve always wins.  All else being equal, lower production could mean higher oil prices.  We put this theory to our E&P friends to see how they would capitalize on such an event.  At first blush, most agree with our thesis, but lack of liquidity limits their ability to capitalize.  They are quick to point out, however, the recent flurry of DUC completions could stabilize near-term production, thus any production response would be later in 2021.  Another more cynical contact agrees the current E&P liquidity crisis will eventually lead to higher long-term oil prices.  At the same time, “in the long-term, we’re all dead” is his parting message.  Uplifting.

What does all this mean?  Good question and hard to know.  Our working theory has called for higher activity at the start of a new year.  Access to fresh capex budget dollars along with a return of private E&P D&C activity would help drive our modeled Q1 activity uplift – at least that’s what we had been assuming.  Sadly, according to some E&P’s, this is an unlikely event given the pending borrowing base redetermination process.  Yes, DUCs will continue to be completed, but adding rigs may be delayed until commodity prices rise.  One E&P was emphatic it would need $50 WTI before it added a rig.  But while most of our E&P meetings point to restraint on the drillbit, we did visit with one E&P who will add ~2 rigs while service company contacts point to a couple one-off additions later this year.  The challenge with varying replies is it’s hard to make an impassioned call, but we left Midland with a less optimistic view of our Q1 rig count recovery.

Random Observations.  In keeping with banks getting squirrely, one private OFS company reports a request by its bank group to proactively reduce its line of credit.  The service company, which is in good financial health, had multiple millions of unused capacity.  The bank, a local Texas institution which should normally be pro-energy, called our contact and asked the company if it would need to use the unused credit.  If not, the bank asked the service company if would voluntarily cut the line.  The service company agreed to do so.  Another example of banks trying to reduce their energy exposure.

Lastly:  Earlier this week, we announced our February 24-26th Houston Energy Conference and Expo.  The event will be at Minute Maid Park.  Please mark your calendars.   Also, our next Houston Golf Outing will be held on October 14th.  A few spots remain.

BTW:  Our Hampton Inn was near capacity this week.  Local dining establishments still had lots of open tables, however. 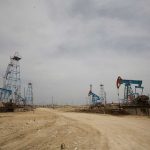 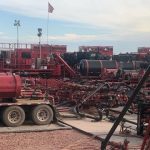