THRIVE 2022 Conference:  Our weekly pestering kicks off as we try to encourage folks to register for THRIVE.  We are tracking roughly 220 registered companies and 450 registered individuals; however, a number of sponsors/exhibitors have yet to register a single person.  We employ this forum to gently remind folks to register as we will turn away any non-registered folks at the gate.  Contact us if you need the registration link.

Pressure Pumping Observations.  Worth noting the following consistent themes from the HAL and RES calls.  First, HAL specifically stated its investment in new electric fleets is for replacement, not expansionary purposes.  RES meanwhile does not have any new frac fleets on order, but it does incorporate some capex dollars in its 2022 budget for potential new fleet investment, most likely another Tier 4 dual-fuel fleet.  With respect to near-term guidance, HAL forecasts flattish q/q revenue within its C&P segment while RES believes its top line in Q1 will be up slightly relative to Q4.  Although just two data points with still plenty of earnings to go, the commentary is largely consistent with our view that frac activity is stabilizing and will witness modest growth in 2022.  Also, worth noting both HAL and RES highlighted efforts to raise pricing, thus the flattish q/q revenue guide further supports the trend of stabilizing completion activity.

More E&P M&A.  Two notable deals this week.  First, Chesapeake Energy paid $2.6B ($2B in cash, plus 944M shares) for Chief E&D Holdings and associated non-operated interests. The acreage is complementary to CHK’s position in the Marcellus, and the deal is expected to be immediately accretive on virtually every metric, including to free cash flow. The transaction also adds 200mmcf/d of takeaway capacity, and industry insiders we talked to suggest that that could be the star of the show, given limited incremental egress from the basin.  With respect to activity, CHK’s pro forma capex in 2022 is budgeted at $1.5B to $1.8B vs. a range of $1.3B to $1.6B prior to the Chief transaction.  The 2022 Annualized Chief capex contribution is estimated at $225M, all of which is in the Marcellus.  Presently, two rigs are running on the Chief acreage with 1-2 rigs expected to run in the coming years.  Interestingly, CHK contends 1-2 rigs equates to $100-$200M of capex which holds production flat and allows the asset to generate annual EBITDA of ~$800M. Cash synergies from the transaction are expected to range between $50-$75M.  The synergies and cash flow accretion support CHK’s announced plan to raise its dividend by 14% to $2/share.  Separately, CHK sold its Powder River Basin assets to Continental Resources for $450 million.  The second announced transaction is a smaller $400M purchase by Maverick Resources of certain Permian properties owned by ConocoPhillips.

Reply All = No Bueno:  Over the years I have been the unintended recipient of inadvertently sent emails.  Call it arrogance or me simply being too judgmental, but I always wondered why people didn’t pay more attention before hitting send.  Sadly, the email gremlins got me this week.  In a good faith effort to quickly reply to an email and doing so as I walked the streets of Denver, a really embarrassing mistake unfolded.  I accidentally employed the dreaded Reply All function and go figure, somehow the email went to a bunch of folks on our distribution list by mistake.  This was quickly followed by a sickening cold and nauseous feeling as fear immediately set in.  My life flashed before my eyes and sadly, it was boring.  In any event, I would like to apologize to those who were a recipient of this email faux pas. That said, to the extent any silver lining can be found in my blunder, it is the fact that this Reply All email, I believe, had the highest readership of any DEP note published to date and also garnered the most feedback.

HAL: Q4 beat the street on both revenue and EBITDA.  HAL’s stock initially traded lower with the broader market last Monday, then recovered and ended the day up 4+%. HAL was up 13.8% last week vs SLB +9.1%, BKR – 0.3% and S&P essentially flat.   YTD HAL is up 37% vs the S&P down 7%.   HAL’s outlook the last several quarters has been positive as it sees global demand strong and fragile supply due to several years of underinvestment in new production.  Both C&P and D&E showed double digit top line growth in Q4.  D&E margins surprised to the upside expanding to 14% in Q4 vs 10.8% in Q3.  C&P margins were 14.7% in Q4 vs 15.1% in Q3, guidance called for 50bps expansion q/q.  HAL generated $1.4B in FCF in 2021 and ended the year with $3B in cash after retiring $685M of LT debt. Two important items: HAL increasing dividend to $0.12/share in 1Q22 from $0.045/share; HAL is retiring $600M of $1B debt maturing in 2025. HAL’s NAM revenue growth was up 10% q/q driven by frac and drilling activity, partially offset by lower artificial lift activity.  In NAM HAL expects customer spend to grow more than 25% y/y with the largest increase to come from private operators.  Expect pricing gains for both low emission equipment and Tier 4 diesel fleets in 2022 as HAL is sold out and believes the industry utilization is close to 90%. HAL expects over 30% incrementals in frac in 1Q22.   Other observations:

HES: HES reported in-line Q4 production volumes (Bakken ahead, GoM below). Capex of $593M, however, was below expectations of $650M.  The company drilled 17 Bakken wells (13 completed) during the quarter, vs 22 drilled (18 completed) in Q3.  Looking forward, 2022 production volumes are expected to be about 3% below consensus, but up 6% at the mid-point vs. 2021.  Capex for 2022 budgeted at $2.6B, +42% from last year’s $1.83B.  Roughly $1.0B of the 2022 capex budget will be directed at U.S. operations.  In the Bakken, HES will maintain its current 3-rig program with well costs of $5.8M expected to stay flat. Recall on the Q3 call, HES indicated the possibility of adding a fourth rig in 2022, but that now appears to be a 2023 event.  HES further noted service-cost inflation both on- and offshore but cited its current GoM dayrate of $255k/d as evidence of a continuing low-cost environment in deepwater.  Lastly, a dividend increase will come once the company’s $500mm term loan is paid down.

APA: APA Corp released an earnings supplement with few operational surprises (international natural-gas prices were light). That said, the company bought back about 8% of its shares outstanding during the quarter for roughly $863M.

CVX:  Chevron’s fourth quarter results missed expectations and provided guidance for 2022 production to be flat to down by 3%, largely due to two production-sharing arrangements expiring in Indonesia and Thailand. Total capex forecast remains intact at $15 billion (up 28% from $11.7 billion in 2021), despite service-cost and inflation pressures.  Q4 capex totaled $3.7M.  Notable that CVX will allocate $3B to the Permian in 2022, up from $2B in 2021.  Global cost inflation pressures have amounted to low-single-digit percentage changes, with the Permian running higher (although not the double-digit growth some other operators are seeing). Production in the Permian is slated to grow by 10% in 2022 from 2021’s 608,000 BOE/d.

VLO reported a substantial earnings beat, due to the strongest fourth-quarter refining margins in several years. The quarter was marked by strong demand for diesel (exceeding pre-Covid levels), gasoline (nearing 2019 levels), and jet fuel (recovering) in the US. Moreover, refining capacity downtime in Europe due to high natural-gas prices and rationalization elsewhere led to strong product pricing. Management is optimistic about demand trends going forward and believes “true” refining utilization in the US is understated at c. 88%.  They believe the true number is closer to 90-95%, which augurs well for forward margins.

PSX reported a strong quarter with better-than-expected results in every business segment. In refining, management confirmed strong demand trends and remain constructive in 2022, noting that with each wave of Covid-19, the demand impact has lessened. Phillips66 is also seeing more capacity rationalizations for the industry than additions, which should help margins. That said, turnarounds look particularly heavy this year at $800-900 million (the highest in company history), leading to full-year guidance of high 80% utilization. 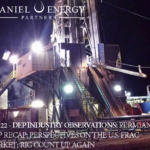