We recently returned from a five-day mini vacation to the Florida Keys and Miami Beach.  Unfortunately, no oilfield here, so we felt a bit out of place.  For us, walking around the beach is akin to Lewis walking past Stan Gable and his fellow Alpha Betas.  Somewhat intimidating.  The good news, however, is we found solace at a beachside Tiki bar where we could catch up on energy news as well as make a few industry update phone calls.

Now, before we jump into our weekly thoughts, we want to remind people to check their inbox for the registration link to the THRIVE Energy Conference.  The link is going out to clients and sponsors as we speak – some have received it already and others will get it Monday/Tuesday.  Next week we will circulate the final agenda as we are still making a few tweaks and awaiting some speaker confirmations.  Two reasons why you should join us.  First, the conference is content rich. Second, and a better reason, is the fact that my mom is traveling down from North Carolina to see what a DEP event is all about.  She doesn’t really understand what her son does for a living, so we want to fool her into thinking she raised a half-decent and somewhat successful kid.  Please make mom proud by showing up.

PTEN Announces Sale of Well Service Assets.   As expected, PTEN announced the sale of the Pioneer well service and wireline assets, fetching a sales price of $43M, subject to working capital adjustments.  For PTEN, this is a good move as the sale allows PTEN to focus on core competencies.  What’s noteworthy about this transaction is the buyer – privately-held start-up Clearwell Dynamics, LLC.  Clearwell is a new entity owned by experienced well service industry veterans with whom we have enjoyed a long relationship.  We learned via an update with Clearwell that just over 50 of the rigs are running.  While opportunities to deploy incremental rigs exist, management will focus on price and the return of cash to shareholders vs. EBITDA growth. Acquisitions are not out of the possibility, but the desire to maintain a clean balance sheet and distribute FCF to owners will supersede the desire to grow for growth’s sake.  The purchase by Clearwell is not, however, a consolidation play given Clearwell is a new enterprise.  As we have opined repeatedly, we continue to believe more consolidation within the well service sector is required for those businesses to generate a sustainable return.  Good news, though, is Clearwell’s plan to decommission and not-sell non-core rigs.

NexTier Pre-Release.  Encouraging news from NexTier earlier this week as it issued updated Q4 guidance which handily exceeded consensus estimates.  The company also offered a positive outlook into 2022.  Consequently, NEX shares jumped ~40% during the week.  We’ll touch on the results momentarily, but the significant jump in price tells us that no one is really paying attention to the domestic onshore OFS sector and the changes unfolding – we explain why we think this below.

As for Q4, NEX sees adjusted EBITDA totaling $57M to $62M (we exclude the $18M gain on asset sales).  This compares to consensus expectations of $49M.  Yes, a nice beat, but remember the company stated in its Q3 earnings press release that September monthly EBITDA was $18-20M and that October was even better.  Moreover, the company noted at time of Q3 earnings that one incremental fleet would be deployed in late Q4, thus a modicum of organic growth.  Yes, there is seasonality during Q4, but we are not aware of anyone who called for a pronounced slowdown.  Therefore, keep this simple and take the low end of the September monthly run rate. Simple extrapolation yields quarterly EBITDA in the $54M vicinity, so we are confused why consensus settled at $49M with prices trickling higher, a modicum of organic growth, a better month in October all offset somewhat by seasonal factors.  Now, keep in mind DEP does not model companies, but we did read the press release and listened to the conference call.

The stock movement also reflects management’s positive commentary as company profitability is poised to improve.  NEX sees double-digit EBITDA per fleet in 2022 – makes sense.  Let’s dig into this real quick. Recall, Q3 gross profit per fully-utilized fleet was $7.3M.  For Q4, we don’t know gross profit yet, but we have a range on EBITDA per the guidance.  If we assume that ~90% of NEX EBITDA comes from its Frac/Integrated wireline business and we further assume that Q4 adjusted EBITDA comes in at $60M, this implies about $8M of annualized EBITDA per fully-utilized fleet.  Also, recall that annualized Q3 revenue per deployed fleet was $54M and only included one month of the Alamo fleet, which we believe performed better financially than the legacy NEX business (implying run rate revenue per fleet could be higher?).  Now, consider NEX management commentary this past week that double digit price increases in 2022 are expected.  We’ll keep the math simple and assume 10%.  That yields annualized revenue per fleet of ~$60M based off the Q3 results (presumably Q4 was better).  If all the price increase went to the bottom line, which it doesn’t and won’t, the implied EBITDA per fleet would approach $14M.  Now, step back and consider that we and others have been writing about double-digit price increases for several months.  All the Q3 commentary from frac providers also aligned with what we reported.  So, for anyone paying attention, the NEX news shouldn’t have come as a surprise, yet the 40% jump in stock price says it did.

Final point, consistent with the guidance on the Q3 call, NEX exited Q4 with 31 deployed fleets and averaged 30 deployed fleets during the quarter (29 fully-utilized fleets).  For Q1’22, NEX will deploy one incremental fleet.  Takeaway – activity growth continues, albeit stabilizing.  Consistent with the company’s prior guidance as well as within our broader industry expectations.

Precision Drilling Update.  Helpful company update this past week as PDS highlighted its near-to-medium capital allocation priorities.  By way of background, PDS has been very good in recent years about laying out its near-term operational and financial objectives and then delivering on that expectation, thus we pay attention when the company updates its views.  Most recently, debt reduction has been the primary goal (in our view) and on that point, PDS delivered, reducing debt by C$665M since the beginning of 2018.  With nearly C$1.1B of debt outstanding (as of 9/30), further reductions are anticipated as PDS announced an objective to repay an additional $400M over the next four years – seems reasonable and achievable in a $70 WTI environment.  More importantly, however, is the plan by PDS to use 10-20% of FCF before debt reduction for capital returns to shareholders.  To us, this is a sign of management’s confidence in a sustainable level of decent industry activity and most likely comes in the form of share repurchases.

Other:  We received some OFS comments about Permian jobs the past 1-2 weeks being shutdown due to lack of sand (perhaps driven by a lack of drivers).  The view was shared by a few, but not all contacts.  We’ll ask around more when we go to Midland in a couple weeks.  Lastly, we gave notice in a recent missive about our plans to cleanse our distribution list for certain industry non-subscribers.  If you find this is your last Sunday note, that means you (or your company) never signed up as a formal client.  Contact us next Sunday if you want to continue to receive the note. 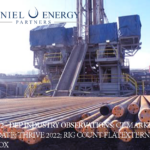