Brief note this Monday afternoon as we took time off this past weekend to participate poorly at a beer pong tournament at our son’s fraternity at the University of Virginia.  Looking ahead, Q3 earnings kicks off this week as does the Permian Basin Oil Show, so look for meatier industry commentary next weekend.  Also, we will host our semi-annual golf outing on November 10th at the Woodlands Country Club.  Please be sure to let us know if you are interested – priority, as always, goes to DEP Gold/Silver clients first.

New Electric Frac Solution:  Limited details thus far, but EnQuest Energy Solutions unveiled via social media its new electric frac trailer design.  The company’s unit, called Thor, features a 5,000hp GD Thunder power end.  This week EnQuest will display the unit at the Permian Basin Oil Show, which we will attend.  There we hope to learn more about the rollout of the unit, particularly the demand outlook.  In addition, we have heard another builder will also introduce its electric solution at the PBIOS, so stayed tuned to see if this field commentary proves correct.  With respect to the EnQuest unit, the company’s push towards the electric market is emblematic of the industry trend to design/sell emission-friendly equipment.  The near-term challenge will be contracts/pricing which allow the frac companies to build these fleets while E&P companies will need to assess which electric offering best meets their needs.

DUC Thoughts:  Many months ago we highlighted the simple reality that more well completions vs. wells drilled has two potential outcomes.  Either the industry runs out of drilled but uncompleted wells (“DUCs”) to complete, thus the frac crew count must go down or the drilling rig count would need to accelerate to maintain some form of normalized DUC inventory/completion activity.  We provided no detailed analysis with the observation as it really is just common sense, but when the frac crew count accelerated in mid-2020 and the rig count, at that point, remained dormant, it was a reasonable assumption.  By way of background, the U.S. DUC inventory peaked at 8,962 wells in June 2020, but has since declined each month and now stands at 5,713 wells as of August 2021.  The data, which is tracked by the Energy Information Association (“EIA”), lags and is calculated using multiple industry sources.  Also, while we share our DUC views this week, there are several others who have preceded us in publishing their DUC views, some a bit more sophisticated than our approach.  Namely, we enjoy the work from the Raymond James E&P team.

Here’s some background for why we are digging into this topic right now.  Last week a smart Permian E&P contact reached out to DEP to inquire about the Permian DUC landscape.  According to the EIA, there are 2,119 DUCs in the Permian as of the end of August.  Now, we do not believe EIA data is without blemish as it is government compiled data, but because it is free and because it is public, we use it.  As we assess the Permian DUC landscape, we note our E&P contact’s company will not complete wells on a pad while the drilling rig is still on it.  The company further commented that its pad sizes can reach as many as 10-12 wells.  Other E&P players as well as multiple Permian frac contacts claim a better Permian-wide average would be closer to 4-5 wells per pad.  All agree the drilling rig is off the pad once the frac crew commences operation.  For the following analysis we implicitly embrace two assumptions: (1) average Permian pad sizes of 4 wells and (2) no wells are completed until the drilling rig moves off the pad.  Recognize, of course, this is a high-level observation where most likely third-party data sources could give a much more precise answer to our assumptions, but because this note was drafted from the road this weekend, our access to lots of data was/is not readily available.  Be that as it may, the following commentary is really meant to spark discussion amongst our industry readership and we’d love any feedback, particularly from our E&P friends.

The table below includes historical monthly DUC figures (Permian only) as well as various activity measures, most of which is compiled and reported by the EIA.  Other figures represent DEP estimates and feedback from industry sources.  With this data, we make a simple forecast of the Permian DUC count employing a modest improvement in both the Permian drilling rig and frac crew count.  Note, the Permian DUC balance has been declining by about 129 wells per month since the start of the year.  Our forecast for Q4’21 and Q1’22 assumes a continued m/m decline, albeit at a slower rate given our expectation for a bump higher in drilling activity. 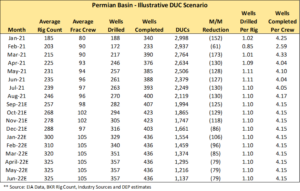 During our dialogue, one Permian E&P contact employed a phrase called the “natural” DUC.  The concept for this term stems back to a series of assumptions in the preceding paragraph.  Specifically, if the average pad size is roughly 4 wells and no drilling rig is drilling/located on the pad during the completion process, then the “natural” DUC inventory, per our contact, is simply the working rig count times the average number of wells per pad.  So, with the Permian rig count today at roughly 268 rigs (per BKR), then the natural DUC figure would be roughly 1,072 wells.  Using the EIA’s August figure of 2,119 Permian DUCs, the amount of DUCs which would need to be completed without any change to either drilling or frac crew activity is roughly 1,047 wells.  However, given the EIA data is stale, the real natural DUC inventory is probably closer to ~917 wells assuming the m/m reduction in Permian DUCs is consistent with recent months.

What does this mean?  Good question as this is a very high-level observation, but simplistically, if nothing in our series of assumptions were to change, the math would imply the Permian would see its “natural” DUC inventory fall below the natural level of 1,072 wells in about eight months.  In the all-else-being-equal world, this would suggest the rig count would then need to accelerate in order to maintain existing frac activity or frac activity would be poised to fall.

Now, common sense tells us all things aren’t equal as there is an intent by many E&P companies to ramp drilling activity in the coming months – just look at the BKR land rig count which keeps gaining each w/w.  The Permian, for instance, witnessed a 7% gain in the rig count since the start of September and recall from our E&P survey in September that many E&P’s stated plans to add more rigs.  Moreover, while we use a simple average of 4 wells per pad, the E&P contact who initiated our thought process claims a conservative number would be closer to 6 wells per pad.  A second large E&P claims its average is 4.4 wells/pad but will move to an average of 5-6 wells per pad in 2022.  Therefore, what happens if we were to use a slightly more elevated set of assumptions, say 4.5 wells/pad with a higher rig count?  That scenario is presented below.

Take a look at the bottom two tables which assume a 300 and a 325 Permian Rig Count scenario.  If the average pad size is closer to 4.5 wells per pad, the natural DUC inventory would be between 1,350 and 1,450 wells.  Again, using the EIA data as of August and adjusting for a reasonable estimate for well completions in September, the Permian DUC inventory is likely around 2,000 wells today.  If the natural DUC inventory is closer to 1,400 wells, then our current pace of completion activity would suggest we dip below the natural level in about 4-5 months.  Therefore, for the industry to maintain its natural DUC inventory and maintain the current pace of frac activity, per our methodology and assuming no changes in D&C efficiencies, we believe the Permian rig count needs to rise toward the vicinity of ~360-370 rigs sometime in Q1 – remember there is a lag between the time the rig starts drilling a pad and when it leaves, perhaps 6-8 weeks for a 4 well pad.  For this reason, while all anecdotes point to higher completion activity in 2022, we wonder if we could see a modest Q1 completion pause in the Permian as some E&P companies could be forced to slow completions in order to let drilling activity bolster DUC inventories. Is this crazy?  Not sure, but just this week, for instance, we were made aware of a large E&P purportedly looking to offload a crew so that its drilling activity could catch up with the completion program.  And why this could potentially matter is we are now entering RFP season so supply/demand prospects for drilling and completion services presumably influences pricing, perhaps why we had the initial E&P inbound on this topic.  As always, time will tell if our pondering is much ado about nothing. 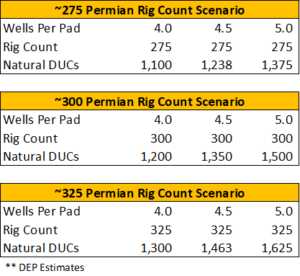 U.S. Land Rig Count:  Another healthy w/w increase.  The BKR U.S. land rig count gained 9 rigs to 529 rigs.   Weekly gains continue to impress rendering our last rig count forecast too conservative, thus we will revisit our drilling outlook in a couple weeks.  Many months ago, we placed two $1 bets with esteemed E&P executives regarding the over/under for the U.S. rig count on March 31, 2022.  We took the over on 625 rigs.  For some time after that bet, we felt we were out of the money.  Now, we’re not so sure.  Good thing oil is at $80+ so they have the funds to pay up if our view proves prophetic. 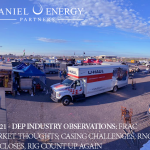 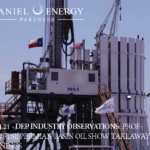