Upcoming Trips/Events: (1) Dallas on Tuesday and then to OKC/Tulsa on Wednesday/Thursday; (2) DEP Houston Christmas Party on December 7th; (3) Husband/Wife Midland tour to host a DEP BBQ cook-off for the Bynum school on December 14th followed by Permian meetings on the 15th; (4) Father/son Christmas Field Tour the week of December 20th – some place really cold and uncomfortable to make him suffer for past and future college misdeeds.

Personal Observation.  We attended a Veteran’s Day Celebration hosted by Freemyer Industrial (thank you Len).  The event featured multiple musicians, but one stood out.  Check out Tony Melendez.  He is the most amazing and inspiring performer we have ever seen.  We highly recommend Tony for any company looking to book a quality musician who can also bring hope to your organization.  He is a tremendous example how anyone can overcome their challenges.

Industry Discussions.  We had the chance to catch up with multiple folks this week. Here are a few quick anecdotes.

THRIVE 2022 – February 22-24, 2022:  Our working agenda is nearing completion and will go live later this week.  For those not speaking at THRIVE 2022, don’t fret as we will have opportunities at our Telluride Executive Series in June, our London Energy Day in June, our European Energy Conference at the Gleneagles Resort in August and potentially at our Permian Basin 2022 Cook-Off in September.  Finally, we are seeking sponsorship support for THRIVE 2022.  Our final sponsorship brochure is also expected to be finalized later this week, so please let us know if your company would like to support the event.  Thankfully, we have already been blessed with a number of early sponsors, many of whom have loyally supported DEP since our inception.  We are very appreciative of these folks as they are helping lift THRIVE 2022 off the ground. 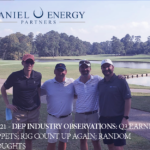 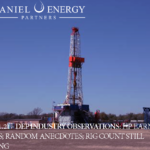