Early release of our weekly note as we start our drive to Midland momentarily.  Cooking BBQ on Tuesday at the Bynum School and hoping to book some meetings while in the Permian – let us know if you are around.

KLXE Q3 Earnings:  Reported fiscal Q3 earnings on Thursday.  The fiscal quarter is for the period ending October 31st.  Consolidated revenue up 24% q/q to $139M.  Adjusted EBITDA totaled $5.0M, up from $0.6M in the prior quarter.  Revenue exceeded guidance handily as KLXE previously guided an 8-12% q/q expected improvement.  For calendar Q4, revenue is guided to improve 9-13% q/q to a range of $140-$145M.  Improving top line results reflect higher activity and pricing, including KLXE’s reactivation of its frac fleets.  The company is now running two frac spreads after having had the entire fleet parked for several quarters.

Conference call commentary highlights KLXE’s efforts to push pricing higher as management noted material price increases have been implemented (magnitude not disclosed).  Management also called out employee poaching, a common event when upcycles develop and something which today is serving as a key driver in higher labor rates.  COVID commentary was particularly granular again as KLXE incurred $1M YTD for COVID testing and treatment.  Interesting data as KLXE had 950 quarantine days in Q3 vs. 300 in Q2.

U.S. Well Services Contract Award.  Multi-year contract award announced this week by USWS.  The company and Callon Petroleum agreed to a three-year contract for frac services in the Permian and Eagle Ford.  Financial terms were not disclosed but given the tightness within the emission-friendly fleet market, we would assume a reasonable construct was formed.  Here’s what is interesting to us.  USWS had previously conducted a trial with Callon, but this was a relatively short trial with only 160 stages completed (~3-4 wells?).  The fact that Callon would enter into a three-year contract after what we believe is a short field trial seemingly appears to be a nice testament to the quality of USWS’ work.  It is also further evidence, in our view, that the elimination of diesel and the corresponding emission reductions will continue to drive the shift to electrification and/or Tier 4 dual fuel adoption.  The industry remains in the early stages of this transformation, but look for more newbuilds and upgrades in the coming quarters.

NBR Analyst Day:  NBR hosted its 2021 investor/analyst day on Friday.  Lots of meat to digest from a nearly 2-hour, 120 slide presentation, but we’ll keep this brief, focusing on financial observations and outlook.  Specifically, the company offered up its 2023 financial target.  A bold move, so kudos to management for its willingness to take a stab at the future.

For 2023, the company envisions the following:

Plenty of discussion on NBR’s technology and the observed benefits of such technology to customers.  Also, the discussion featured NBR’s efforts toward energy transition, including tackling the geothermal market.  Customer testimonials were featured along with technology commentary from NBR’s third-party partners.  Overall, the discussion presented numerous anecdotes supporting drilling technology investment and its impact to drilling efficiencies.

Another Equipment Auction.  Superior Energy Auctioneers will host another auction this week (12/14) in Oklahoma City.  Featured assets include 17 well service rigs and a basket of well service-related ancillary equipment.  On the one hand, you hope this is a successful auction for our friends at Superior, but on the other hand, we wish someone would nuke these well service rigs and permanently remove them from the market.  A quick glance at the asset listing suggests several of the rigs were built before 1980.  One has to wonder not just about the quality of any rig built prior to 1980, but also why E&P’s purportedly focused on safety would embrace their use.  Best guess is a chunk of these get bought for parts or sent overseas.

BTW – there were two auctions last week – one hosted by Permian International Auctioneers which featured legacy drilling equipment as well as a few workover rigs while the other was hosted by Superior Equipment Auctioneers which featured well service equipment and a host of fishing and rental tools.  We did not listen to these auctions as we were on a deer lease, but we’ll endeavor to get info on equipment prices and buyers. 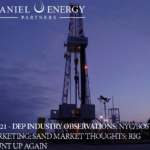 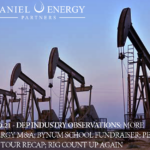