This weekend our epistle largely focuses on DEP’s recent NYC/Boston marketing trip.  We’ll return to more industry observations next weekend.  As for upcoming events/travel, the DEP Christmas party is on Tuesday in Houston.  If you join us, please consider taking Uber.  The week of December 13th, we’ll be back in the Permian to cook BBQ for the kids/staff at the Bynum School on December 14th.  Bringing my bride on this trip, so come out so she thinks I have friends.  Lastly, the week of December 20th we hope to hit ETX for the annual father/son oilfield Christmas Tour.

Investor Marketing Takeaways: This past week we spent five days visiting institutional investors in New York City and Boston.  Notwithstanding Omicron and anemic energy weightings, the schedule was relatively strong, although not quite the go-go days of 2008-2014.  That said, interest levels appear to be growing, although we didn’t sense a rush to own OFS just yet.  Rather, investors remain comfortable with their E&P positions.  Also, the client mix included both equity, credit and private equity investors as well as an equal balance between long-only and hedge funds.

The following are several of the key themes/questions.

Sand Market Thoughts:  Continued signs of tightening in the sand market.  This week we received unsolicited inquiries/observations on the sand market from both E&P and frac company contacts.  The nature of these inquiries led us to make some calls to sand friends.  First, we have additional anecdotes of in-basin sand prices moving higher.  One Eagle Ford sand contact confirms sand is being contracted in the $30+/ton realm while Permian sand contacts report contracted sales in the $20-$22/ton range.  One regional player’s CEO shared his recent internal mandate to salespeople which is to drive prices higher with hopes of up to another +20% increase during 2022.  The CEO believes it’s time for his business to make money and that all benefits/profits of an improving oil macro shouldn’t just be to the benefit of the E&P customer.  Moreover, the contact contends some lost market share at the expense of higher profits is the right decision.  Folks can agree to disagree with this strategy while time will tell if this actually occurs, but the bigger theme is a message which is consistent to the refrain we’ve been reporting for months.  Specifically, there is a desire by many company execs to address the current disparity between customer and service provider.  Separately, we had a frac company in the Northeast share frustrations over sand availability, thus one would assume regional prices there could be going higher (we don’t have specific price anecdotes yet).

The issue, according to some mines, is two-fold.  First, maintenance practices at mines in recent quarters have not been ideal due to sustained weak profitability.  Second, the shift to simulfrac is creating an added stress on both the sand mine as well as the logistics provider.  These stresses can lead to shortages according to sand contacts.  As for the longevity of the price gains, mixed views from sand contacts.  Some contend improving financial results will lead to increased capacity/throughput while others see a tight market in both the short-and-medium term.  What likely happens, however, is a shift by E&P players to reduce sand costs, thus we would not be surprised to see more E&P companies shift to wet sand and/or evaluate mini-mines.

OFS M&A:  Transaction in the OFS capital equipment space announced this week as Lee Specialties will combine with Nexus Energy Technologies, becoming NXL Technologies.  The transaction brings together expertise in the wireline market and the coiled tubing pressure control market.  Moreover, the new enterprise will have greater scale and presumably should be able to achieve some degree of cost synergies.  No transaction terms were provided. 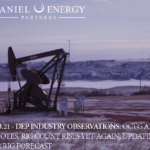 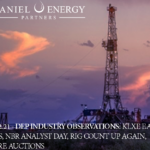