Oklahoma/Denver Recap:  We spent two days in Oklahoma and a day in Denver last week.  The meeting schedule included updates with pressure pumping, land drilling, well service, E&P, pump-down and diversified oilfield service companies.  The mood this trip was clearly better than our visit last fall (an obvious statement), but optimism remains tempered given the huge sell-off in oil prices; another bout of weather in the Colorado/Rockies region and oil service profit margins, which improved, still feel ephemeral in nature.  With respect to weather, companies operating in the Rockies area lost a couple days of work due to the massive snow storm which hit the region on Sunday/Monday.  In our view, bad weather in the Rockies is normal, but the weather gremlins seem to be causing havoc so far in Q1.  Case in point, NOV called out weather in its operational update this past week.  We suspect they won’t be the only company to highlight the Q1 weather woes.

In terms of activity outlook, we visited with three land drilling contacts.  Between the three companies, the cumulative expectation for incremental rig deployments over the next ~2 quarters is 14 rigs.  This represents a 32% improvement over their current activity levels.  Customers picking up rigs are predominantly private E&P’s.  To that point, we met with three private E&P’s as well.  One will see its rig count rise from 2 rigs to 3 rigs, another isn’t drilling today, but will pick up its first rig while the third will hold steady at current levels, potentially dropping a rig late this year.  In our meetings, we presented our view the U.S. rig count (as measured by BKR) would reach 600+ rigs in 1H’22.  No one shared our optimism.  We acknowledge this target is a bit of a stretch, especially given the sell-off in oil last week.  Remember, most contacts generally state an expectation for +25-50% activity gains should oil prices stay $55+ during 2022 budgeting season.  That would put the rig count in a range of 500-600 rigs.  But, our experience is the business tends to over-shoot on the upside as well as on the down side. We’ll reassess our rig count forecast in late Q2.

In terms of completion/frac crew activity, local contacts point to 12 active crews in the Mid-Con, of which two are doing vertical fracs while another crew is performing N2/CO2 work.  The frac crews per one contact are split between nine frac companies and ten E&P companies.  According to industry contacts one E&P is poised to add two fleets while a second E&P is potentially adding a crew as well.  A second industry contact, meanwhile, reports a total of 9 frac crews split between six frac companies.  The difference, we believe, is likely the treatment of vertical work and job mix.  The important takeaway, however, is an expectation for continued completion activity gains, at least in the near-term.

As for service costs, there was universal agreement about service cost inflation.  E&P contacts acknowledge instances of high single-digit and low double-digit increases.  For those completing wells in the spot market, the most pronounced increases are sand costs while higher steel costs are also cited.  Our pump-down contact recently saw a $1,000/day increase in its daily pumping charge while our well service contact is actively trying to raise rates as well.  This contact reported efforts by at least one E&P who may add double-digit workover/production rigs while local contacts also tell us one E&P recently sold its workover rig fleet to a PE-backed enterprise.  No word on valuation.  Of note, some E&P’s, however, are somewhat protected on service costs due to contractual price arrangements made last year while in other cases, the net effect of the service cost increases are somewhat muted due to continued efficiency gains.  Most realize, though, service costs need to move higher.  Finding labor, according to some service contacts, seems to get harder and harder each cycle.

Finally, in keeping with prior field tours, we conducted several yard drive-by’s – this time focusing on frac packager locations.  We passed four facilities – all seemingly devoid of activity.  In one case, the parking lot was essentially empty with virtually all legacy inventory removed from the yard, save one CT unit.  Two other facilities had no oilfield equipment on site, previously these two shops were doing rebuilds for two frac companies – one of which is not in business anymore and one which went through bankruptcy.  The final site had plenty of kit on site (i.e. engines, pumps, trailers, etc.), but all bay doors were closed with limited employee vehicles in the lot.  Admittedly, this week was spring break for Oklahoma, so perhaps that is the driver of vacant facilities, but if not, it’s a reminder that not all businesses are blowing-and-going.

BKR U.S. Land Rig Count. Nice increase on Friday as the U.S. land rig count gained 9 rigs and now stands at 398 rigs.  The Q1 rig count is on track to average 375-380 rigs, a 26% q/q improvement.  Gains, once again, continue to be most forthcoming from the Permian.

Upcoming DEP Events:  This week DEP takes a few days off to go see Astros spring training so next Sunday’s note will be skinny.  We will, however, come back with our game face on as we have lots planned in the coming weeks.

Permian BBQ Cook-Off.  We made a slight date change to our event.  We will now host the BBQ Cook-Off on September 30th not September 28th.  Feedback from friends encouraged us to pivot towards an end-of-the-week event vs. a beginning-of-the-week event.  Requests from companies seeking a cooking spot has been overwhelming and we are truly humbled by your interest.  Presently, there are 42 cooking teams, but we anticipate having a total of 54.  Priority for cooking slots is given to our top clients.  We are also looking for willing E&P execs to serve as BBQ judges – we need your help!  As the cook-off will be a very large event, we’ll have sponsorship opportunities as well, including spots for equipment displays.  All of that information will be forthcoming in a few weeks – our marketing team is presently working on the sponsorship brochure.  For now, simply save the date and as a reminder, this will be an invite-only event just like the THRIVE Energy Conference. 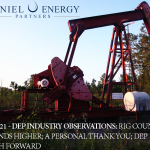