This week we update our rig and frac crew forecast to reflect an improving commodity backdrop as well as to reflect observations imparted during Q4 earnings season.  We also summarize a recent field tour where we learned about a new product offering.

Upcoming DEP Field Trips/Events:  Monday/Tuesday this week, we’ll be in Fort Worth.  Next week, we hit Denver on Monday/Tuesday (3/15-3/16) then over to Tulsa on Wednesday/Thursday (3/17-18) and back through Oklahoma City on Friday (3/19).  We are still building out our schedule, so let us know if you are around.  In keeping with tradition, we’ll likely host a Mickey Mantle’s steak dinner for industry friends.  Our next golf outing for clients will be on April 7th in Houston while we’ll host a one year anniversary social at our office on April 1st.

Rig Count Forecast:  Rig count predictions are more art than science and often require more luck than skill.  Each time we update our forecast, we recognize there is an inherent circular error.  Case in point, over our career we are often asked by industry players for our rig forecast which is then used in conjunction with their respective budgeting process.  At the same time, in order to develop a bottom’s up forecast, we then ask these same companies for their views on future activity.  In other words, sometimes it’s the blind leading the blind.  That said, we still endeavor to make forecasts, thus with Q4 earnings season largely behind us, it’s time to true up our rig count estimate.

As we alluded to in prior notes, the forecast moves higher.  Not drastically in 2021, but a more assertive increase in 2022.  These are our key assumptions:

The result of these assumptions leads us to model the U.S. land rig count improving to an average of ~460 rigs in 2H’21 and exiting 2021 in the 500 rig vicinity.  The 2H’21 expectation represents a ~60-80 rig improvement from today or +15-20%.  Assuming the CY’22 strip holds (i.e. ~$55/bbl), we do believe disciplined animal spirits will emerge in 2022 with most E&P’s likely to increase activity by at least another 20%.  Recall from an old Permian note, we asked E&P’s to humor us with a “what-if” scenario should WTI exceed $50/bbl in 2022.  Responses generally fell in the 25%+ increase in activity with one large player claiming its rig activity could jump as much as 50%.   We’ll query this same scenario during our upcoming field tours (hitting Denver/Oklahoma/Permian in March).  For now, however, we assume the U.S. land rig count rises to the low 600 vicinity by early 2022.  The higher oil price would normally lead us to be more bullish, but we think the public E&P space would be wise to maintain the current discipline for an extended period of time.

Frac Crew Forecast:  Rolling through our rig count forecast as well as well as expectations for continued completion efficiencies, we update our frac crew forecast which nudges only marginally higher.  To be clear, we employ a top-down approach, fully acknowledging this is a horseshoes-and-hand grenades exercise.  Notably, the evolution of simul-frac operations seems to be in its infancy with only a basket of companies employing this approach.  A broader adoption, however, could be a game changer for completion efficiencies as benefits extoled by users of simul-fracs are noteworthy.  Take Ovintiv, for example.  On its Q4 call, it highlighted the virtues of simul-fracs, reporting an instance where it managed to complete 4,400 lateral feet in 24 hours, pumping 220,000 barrels during this time period.  The use of simul-frac operations purportedly saved OVV approximately $18.5M in 2020, thus the company intends to complete 95% of its wells in 2021 using this completion technique.  We have chatted with others who use simul-frac operations and anecdotes of 3,000+ completed feet/day are reported.  The challenge, however, is quantifying the total market opportunity for simul-fracs.  We hope to have a more formal methodology in the coming months, but for now, the theme seems clear.  More simul-fracs are likely another driver of completion efficiencies.  Meanwhile, frac companies also continue to report impressive uptime.  Take FTSI for example.  It reports multiple fleets now pumping over 20 hours/day with fleets regularly averaging 17-19 hours/day.  SilverBow Resources cited examples of completing 18 stages/day during Q4.  These efficiencies matter, but are admittedly hard to model.  Consequently, while we employ a more assertive rig count recovery, we would suspect the rate of growth for completion crews could lag the rig count on a go-forward basis should more E&P’s adopt simul-frac completion techniques.  Not to mention, it would seem all public frac companies are now committed to withholding incremental fleets until pricing recovers.  Lastly, the frac crew count moved more assertively off the bottom already, a function of E&P’s going back to complete DUC’s.   Collectively, the aforementioned commentary leads us to believe a more tempered ramp in the completion crew count is likely.  Therefore, our model contemplates today’s active crew count of ~195-200 fleets increases modestly to ~200-215 vicinity in 2H’21.  Keep in mind, this is active and not effective.  That number would be haircut by 10-15%.  For 2022, we believe the active count bleeds into the ~230-240 vicinity.  Hard to see a surge in working crews if frac pricing does not inflect materially.

SOI – New Blender? Or Frac Missile Feeder System (authored by Sean Mitchell). Members of the DEP team again travelled to Midland last Thursday, this time to view the new blender system developed by Solaris.  The unit, which was on display at the Petroleum Museum for both E&P and OFS companies to see, is yet another solution developed by Solaris for the low pressure/backside of the well.  The unit is ESG friendly as the equipment is plug-in ready for  both Efleets and traditional fleets.  For discussion purposes, we are calling the new blender system another name – the Frac Missile Feeder System – as it is designed to replace the traditional blender.  Here’s the pitch from our non-engineer perspective: it is an electric solution on the backside of the well; it enjoys a smaller footprint and purportedly more redundancy will drive less NPT, creating efficiency gains for both the pumper and E&P companies.  This is a new product, so time will tell just how effective it is, but we took note of the who’s who from the E&P and pressure pumping world who came out to look at the equipment.  And the visit wasn’t just a quick drive by tour.  Rather, we observed folks spending quality time visiting with the SOI team, presumably a good indicator of interest.  SOI’s new Frac Missile Feeder System is the fourth leg of the table for a fully integrated solution on the low pressure/backside of the well which also includes their Chemical Silos, Water Silos and Sand Silos.   Some of the advantages of the new system discussed at the tour include:

Housekeeping Note:  We will soon transition to a new distribution system.  Potentially next Sunday, but most likely the following Sunday.  If you see a disruption in your receipt of our Sunday note, send me an email.  We will try our best to not screw this up.

SND.  Revenue = $25M, +8% q/q.  Adjusted EBITDA = -$7.7M vs. $6.1M in Q3’20.  Cash = $12M with total debt = $30M. Q4 volumes increased to 612,000 tons in Q4 from 309,000 tons in Q3, a +98% improvement.  Q1 volumes guided flat to up 10%, would be better but Texas freeze impacted operations.  2021 capex = $10M to $15M and SND expects to be FCF positive in 2021.  Some of the spend will likely be directed to SND’s SmartPath transloader product offering.  The company now has four of its fleets outfitted with this, but all twelve should have it by year-end.  The SmartPath system, as we understand it, is a self-contained system capable of being used with bottom-dump trailers.  Q4 call highlighted multiple prepared comments on the need and willingness for M&A.  To SND’s credit, it executed on this strategy in Q3 with the opportunistic purchase of Eagle Materials operations.  During Q4, SND turned on the old Eagle Utica operation, a facility gives SND access to another Class 1 rail line. Nevertheless, the sand space still remains too fragmented, thus more M&A is needed to address the supply overhang.

As always, no stock opinions or investment advice intended from this or any of our notes….. 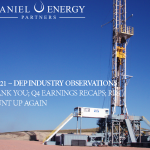 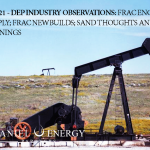