We recently returned from a quick three-day, ~950-mile jaunt through the Bakken/PRB.  Our trip, while educational, was cut short due to weather gremlins.  In fact, we witnessed first-hand operations being suspended with some companies incurring shutdowns for 1-2 days due to North Dakota high winds.  Below is a quick recap of our observations.  Looking ahead, this week kicks of Q1 earnings season with HAL, BKR, SLB and CLB all reporting.

Bakken/PRB Observations.  Shortened meeting schedule due to winter conditions and significant driving time, but our visits with local service companies reveal consistent expectations.  First, completion activity is expected to remain stable with estimated Bakken frac crews hovering around ~10 fleets.  Contacts generally don’t see much near-term improvement with local prophesies calling for ~10-12 fleets throughout the balance of the year.  Consequently, our completion-oriented contacts see little near-term change.  Well servicing contacts, meanwhile, are more optimistic with utilization for one company hovering near ~100% and another company stating activity levels are at pre-covid levels.  Robust production-oriented work drives the high utilization with both companies now operating multiple production rigs on a 24-hour basis.  Looking ahead, one company sees at least a 10% improvement in its rig hours during Q2.  Efforts to move pricing are underway, a necessary process as labor challenges are growing (as is crew poaching).  Both well service contacts were forced to shut down rigs due to high winds while weather-related incidents such as vehicle accidents were reported.  Don’t be surprised to hear companies with Bakken/PRB exposure call out weather issues for Q2.  Drilling activity is also expected to nudge higher as one drilling contact will soon reactivate an incremental rig to the basin.  And while some may laugh that it’s just one rig, recall the Bakken rig count (per BKR) stands at just ~15 rigs so small increases matter.  Lastly, there is local chatter of potentially three Wyoming in-basin sand mines in development.

Emerging Sand Storage System.  Our North Dakota tour included a site visit to a rail terminal as well as an eight-well pad not too far from the Watford City area.  The purpose was to learn more about SmartSand’s emerging SmartPath technology, the company’s loading system used to deliver sand to its SmartDepot storage system.  SmartPath was originally designed in 2019, but the system we toured is what we describe as version 2.0.  Notably, SND invested more R&D to refine the product’s capabilities with the upgraded version now feeding three silos simultaneously versus two previously.  Dust controls appear to be enhanced with management believing SmartPath’s dust mitigation efforts are superior to most competitive systems.  We cannot validate the relative comparisons, but we can attest to seeing essentially no dust, a noteworthy observation particularly when wind gusts the day of our tour exceed 20+ mph.  Also, we can attest to the fact that little loose sand was found in/near the entry point into the SmartPath feeding system.  Another item which we found noteworthy is the system’s ability to run on electric while it can also operate on traditional diesel via its Tier 4 engine.

While the SmartDepot storage system has less storage capacity than other systems (200 tons) per silo, the belly dump offload capability allows for fast unloading (roughly 7 minutes/trailer with driver not getting out of truck).  Moreover, in North Dakota and Wyoming larger trailers historically tied to the grain industry are used for sand transport to the SmartPath/SmartDepot system.  These trailers hold as much as 35 tons, more than the 20-25 tons associated with other delivery methods.  The SmartPath system itself can hold upwards of 35 tons, a benefit should delays associated with trucking logistics exist.  We do note that SmartSand does not own its own logistics fleet, but instead contracts with third party providers.  This operating strategy differs somewhat from some of the existing competition.

In the case of the job we toured, Lobo Logistics managed the sand logistics, employing its 35-ton Haul-MAX trailer.  This trailer, we believe, is unique to the North Dakota and Wyoming market as the state as more flexible trailer weight restrictions.  We believe the weight limit in North Dakota is ~105,000 pounds and Wyoming is ~117,000 pounds.  A key benefit of Haul-MAX is reduced truck loads which, in turn, reduces the number miles driven and diesel consumed.  For example, Lobo contends in a case study that use of its system reduced those metrics by nearly 30%.  This would imply positive ESG considerations due to less emissions and less road traffic.  Moreover, the belly-dump nature allows for quick turns which is a benefit to drivers who get paid based on the number of loads/day.  We did update with Lobo during our trip and learned the company does not necessarily standardize on the Haul-MAX.  In other markets it will work with competing systems.  One data point we found commendable is the fact the company has a TRIR of zero since inception.

SmartSand’s foray into the last mile business began with its purchase of Quickthree Solutions in 2018.  It is our impression the company’s push into last mile has been slower than originally intended, a combination of the time to R&D the system as well as the consequence of the 2020 industry malaise.  Now, however, the reinvigorated SmartPath design is operating in the field with the first newly upgraded system commencing work this quarter.  Initial customer feedback is positive as third-party contacts report a much improved product over the initial design.  This is important as SmartSand faces significant competition as larger players with sizeable as well as established positions presently dominate the last mile segment.  These include Solaris, SandBox (SLCA), Hi-Crush, PropX, Sand Revolution, TSS, Catapult, CIG Logistics, among others.

As with other product-specific comments we have written about in recent months, our thoughts on SmartPath are not an endorsement.  Rather, we appreciate the opportunity to learn about new products coming to market as such products have the potential to be market disruptive.

Flywheel Energy Storage System.  Efforts to reduce emissions and improve one’s ESG profile is generally associated with public companies whose shareholders are increasingly focused on ESG.  Conventional wisdom typically holds that private companies are less concerned about ESG, largely because they are private.  That said, during our Gillette meetings we caught up with Cyclone Drilling, primarily to hear their land drilling perspectives.  However, in our meeting we were surprised to hear how serious the company is taking emission reductions.  By way of background, Cyclone has been in business since 1975.  The company was founded by James Hladky, but is now run by his two sons.  At its peak, Cyclone owned/operated 28 rigs, but during the 2015/2016 downturn, Cyclone scrapped 14 rigs as it focused on its newer generation equipment.  Today, the company is running 6 of its 14 rigs with active rigs drilling in Utah, Oklahoma, Colorado, Wyoming and North Dakota.  The company’s foray into Utah and Oklahoma are relatively new events.  What is interesting, however, is of the six rigs, two are powered off the grid while another three rigs are running on dual fuel.  In terms of outlook, Cyclone sees rising inquiries with many companies looking for rigs in the June timeframe.  Based on current discussions, the company’s rig count should improve to ~10-12 rigs by YE with most of the incremental rigs expected to go to the PRB/Bakken.

While Cyclone’s activity outlook is encouraging, we were more interested in the company’s R&D efforts to reduce emissions.  Specifically, the company is working with KRW Technologies/Avid Controls to develop a flywheel energy storage system.  Prior to our trip, we had never heard of the flywheel concept (for drilling applications), so a quick internet search and YouTube video review helped us gain a modicum of knowledge.  We also posed questions to both the designer and Cyclone.  Simplistically, the flywheel system under development is an energy storage system, much like that of the battery storage system which tends to get more publicity.  The purported benefits of the flywheel system include: (1) an enhanced ability to meet the high-power needs of a drilling rig; (2) lower costs over the life of the system; (3) ability to operate in a large ambient operating temperature; and (4) no recycling issues which could arise with battery technology.  The flywheel system which Cyclone intends to deploy will feature a 2.9 MW rating and will be a single cell device which should lead to better reliability.

Cyclone’s desire to use the flywheel system is based on a belief it can optimize engine efficiency, generating better fuel economies assuming a steady engine load.  It hopes to achieve “peak shavings” whereby it takes the peaks out of demand on the generator.  If memory serves correct, once peak shavings are achieved, the rig can run 100% on natural gas.  At this point, it’s hard to pass judgment on the merits of this technology as Cyclone has yet to deploy its first system and we haven’t seen it operate in person yet.  That will occur later in Q2, so we’ll check in on the product benefits once field trials have occurred.

BKR U.S. Land Rig Count.  The BKR U.S. land rig count gained another 5 rigs this week and now stands at 426 rigs.  Gains have been achieved in 30 of the past 31 weeks.

DEP Upcoming Events:  We are starting to populate the calendar for this summer.  Targeting a theme of baseball, good food and good wine.  Reach out if you have interest or want to learn more.  Attendance for some events will be limited with priority going to DEP subscribers first. 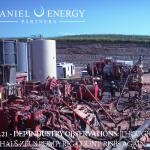 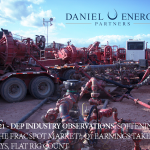