We have returned from a three-day jaunt to the Permian/Fort Worth.  Observations below.  This week we stay in Houston for company update calls.  Next week the research team heads to Bossier City while the sales team heads to Whistling Straits.  Life’s not fair.  Near-term DEP social activities include a BBQ social on May 27th in Houston as we welcome our newest employee.  Limited headcount as the event is at his house and his wife will kill me if too many people show up.  In June, we’ll host another Midland reception, a Colorado Rockies baseball outing as well as our Telluride Executive Series.

Permian Observations.  Hard to find major revelations this close to the end of earnings season, but a couple themes stand out: (1) tight labor market; (2) completion activity stabilizing and (3) rig count still marching upward.  First, labor.  This is a big deal.  It will either be the gating item to a pronounced activity rebound or the basis for more pronounced service cost increases (or both).   Labor tightness should come as no surprise as many OFS companies cited this issue on the Q1 earnings calls.  In fact, even CVX called it out on its Q1 call when asked about inflationary pressures: “And we are seeing this impact more the downstream, trucker shortages, and so that in terms of personnel, we’re seeing that. I think that’s in part the Amazon effect and all of the delivery UPS and the rest pulling a lot of truckers off”.  This theme of employees finding alternate opportunities outside of traditional upstream energy or simply rising employee poaching was discussed in several meetings.  To be fair, when we visited Fort Worth on Wednesday, comments about the labor situation were more muted, but the folks on the ground tell a different story and we tend to lean on the field guys as they are closest to the issue.

Here’s an observation imparted by one contact.  In Midland, many companies draw employees from places like El Paso.  With activity rising, more out of town folks will be needed.  These employees therefore need places to stay as they do rotational work.  In good times, companies provide housing and per diems.  In down markets, sometimes these perks get cut.  Now, with growing labor tightness, there is concern with some local players that such benefits will creep back into the system, a move which at least one contact sees as worrisome.  Margins remain sufficiently thin such that the burden of providing housing and per diems would create another financial headache.  Yes, this would eventually be passed on the customer, but in the short-term there is a lag between inflationary cost pressures and the ensuing ability to recoup those costs.  Also, housing costs are rising.  One OFS company claims its crews were kicked out of a man-camp as the government purportedly stepped in to use the facility to address current immigration challenges.  Presumably, Uncle Sam can pay more.  Meanwhile, our Doubletree rate was $146/night this week, but the front desk said they are starting to book rooms in October in the low $400/night (likely tied to the oil show).  In October 2020, our trough rate was $87/night.

Stabilizing Completion Activity.  We caught up with five completion-oriented enterprises.  The topic of Permian frac crew counts surfaced in each meeting.  Local estimates vary between a low of ~90 to a high of ~95.  We peg it somewhere around ~93-94 as we adjust for a fleet which caught fire this past Sunday.  As for outlook, E&P contacts point to at least 4 crews likely to be dropped in 2H’21, a function of front-end loaded budgets and completion efficiencies.  We asked each completion-oriented contact about their visibility and the refrain was consistent – flattish from here.  One company showed us the “quoted” job board which had ~10-12 quotes on the docket – all for short-term spot jobs.  For our contact, the quote board provided assurance the spot work could make up for any dropped crews in the basin.  Of note, our E&P contacts who intend to drop fleets also plan to bring them back in 2022.

Permian Rig Count.  While completion crew activity outlook was a tad disappointing, the rig count outlook was a bit more optimistic.  We visited with a basket of E&P friends.  The group is presently running ~28 rigs but will collectively end the year at ~35 rigs, a +25% move.  Always dangerous to extrapolate a small set of data points, particularly when folks such as PXD and OXY note plans to drop rigs this year (although we know one player who will likely take one of these dropped rigs).  Nevertheless, a ~20-25% gain from here through year-end feels reasonable to us.

Signs of Attrition?  Drive by most frac yards and evidence of wear-and-tear is obvious.  Here’s another nuance to consider.  Today, several equipment rental companies rent frac pumps to frac providers.  According to one, business is picking up as frac companies are short equipment.  In fact, this week we had one frac company specifically inquire with us about rental options due to their equipment needs.  A second frac company is allocating ~28 pumps to spreads, up from ~20 pre-COVID.  Now, not all ~28 go to location.  Some are in reserve at the yard in case pumps need to be swapped out or while others are in maintenance.  Nevertheless, that’s a lot of stranded capital in a depressed returns environment.  Big frac companies can make this allocation given significant units still against the fence.  Smaller players, however, don’t have that luxury, thus some need to find alternative ways to supplement their active fleets. Lastly, one rental player will soon rent an entire fleet of pumps to a consultant who will then use the rental fleet and contract labor to complete a pad.

Frac Crew Count.  We update our active frac table again.  No major change as it stays in the 200-205 band.  There are those who claim the weekly count is now at ~220-225.  We still can’t get there.  Again, we hope our competition is right and we are wrong.  Our tally is bottoms-up.  We call the frac companies, vendors to the frac industry as well as E&P contacts.  Yes, they might be lying to us, but we don’t think so.  Lastly, our tally is “active” and not “working” which makes us even more suspect of those who report working counts north of 220.  We also count simulfrac fleets as 1 fleet (because that’s how most of the frac companies look at it).  Happy to send out our active fleet table to paying subscribers to DEP.

Private E&P Data Point.  A small Eagle Ford E&P contact was scheduled to have a few wells completed, but the frac provider pulled out of the work due to operational issues.  The company went to the spot market this week and received “competitive” bids from five frac companies, all of whom could provide fleets within 2-3 weeks.  The quick ability to meet this spot work, coupled with the competitive price, gave our E&P contact the impression the frac market remains sufficiently loose.  It’s another reason why we do not embrace a high active frac crew tally.  By the way, the comment is consistent with observations made by other frac companies in the past two weeks (see our old notes) which suggest a less-than-robust market.

Upcoming Auctions.  The DEP team will be attending the Superior Energy Auctioneers event in Bossier City on May 26th.  This auction will feature the liquidation of S3 Pump Service.  Assets include 34 pump down units.  Other assets being sold by existing OFS enterprises include CT units and wireline units.  Last week, Superior conducted an auction of the BJS Canadian assets.  We were on the road and don’t have any color on the success of this auction, but we will attempt to address it next Sunday.  Looking ahead, Permian International Auctioneers will manage the liquidation of ABC Rentals on June 8-9th.  ABC, we believe, was a Permian rental company with operations largely in New Mexico.

DEP Land Rig Forecast.  Cleaning up our rig count forecast to reflect recent field discussions and takeaways from Q1 earnings season.  No major change to 2021 but trimming 2022 a tad.  We continue to believe Permian rig counts will grind higher, a function of the need to replenish DUC inventories as well as a reflection of ~$60 WTI.  Our belief is further grounded by confirmed E&P plans to add more rigs.  For 2022, the Q1 spike we envisioned feels less likely given the persistent drumbeat of capital discipline.  At the time of our last forecast in March, we made a large $1 bet with a smart E&P executives that the U.S. land rig count (per BKR) would hit ~625 by March 31, 2022.  We, of course, took the over and at this point, we sadly envision paying out in early Q2.  We do not give up hope, however, that animal spirits will return.  We continue to wonder how those E&P’s who were hedged in the $40’s approach 2022 should (1) the hedges roll off, which they will, and (2) the forward curve continues to trade in the $55-$60 vicinity.  Our gut says private E&P’s will flex up again in 2022, but we doubt we see similar flex in nat gas markets such as the Marcellus/Haynesville, two areas which account for ~20% of the rig count.  We also believe the large public E&P’s will be measured with their activity levels as long as investors opt for returns/FCF over production growth.

Final Observation.  Lots of talk this week (as well as photos and videos) about a well site incident where a frac crew burned up.  The fleet was purportedly a Tier 4 DGB fleet (50% Tier 4 DGB and 50% Tier 4).  Thankfully, no one was hurt, but an entire fleet appears destroyed (as well as the sand storage system).  No idea how the fire started, so we don’t want to go down that speculative path.  Unclear what this company’s insurance programs are but losing a top-shelf fleet is not good.  Moreover, with annualized cash flow per fleet metrics still in the single-digits, the loss of a fleet is made even more painful (hence why higher pricing / higher returns are needed).  Also, lead times to replace a Tier 1 fleet are not short, thus it would take months, in our view, to replace this equipment on a like-for-like basis (yes, there are a few Tier 4 DGB pumps floating around in fabricator inventory, but we suspect the purchase price just inched higher). 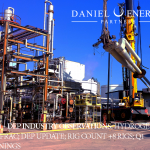 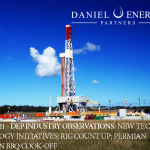