New Technology Highlights.  Several interesting headlines this week as the oilfield continues its quest to lower emissions.  First, our friends at Detmar Logistics announced a partnership with Hyliion Partners.  The partnership will allow Detmar to pursue the electrification of its fleet, beginning with the order of 10 Hyliion Hybrid Electric units which will be installed on 10 of Detmar’s Volvo trucks.  By way of background, Detmar operates 127 trucks, making it one of the leading frac land logistics players. Second, Cummins announced its new Tier 4 Final drilling module ratings at this week’s IADC meeting.  The company unveiled a new Tier 4 final QSK50 Drilling Power Module with two ratings of 1,200 rpm and two ratings at 1,800 rpm.  This introduction is another step by a major engine OEM to provide products which further reduce emissions.  Last, but not least, U.S. Well Services announced its new electric frac pump called Nyx.  The Nyx unit features two 3,000hp power ends and two electric motors on a single trailer.  The company stated that a package of 10 pump trailers, two blenders and a combination switchgear has a capital cost of $23M.  This does not include power generation, but the units can be powered via mobile power generators and/or utility grid power.  The initial trailer was built by Grizzly Manufacturing, an equipment fabricator with operations in Waller, TX and Odessa, TX.  All three of these initiatives continue the upstream energy sectors pursuit to reduce emissions and elevate the ESG profiles of the industry.  What is clear, however, is this will be a process which takes time and capital, thus true partnerships between the OFS and E&P sectors will be needed.

OFS M&A – Glimmers of Hope.  Ranger Energy Services announced the acquisition of Patriot Completion Solutions.  The deal is not a huge surprise as RNGR alluded on its Q1 earnings call to its intent to acquire two companies.  The deal is an all-stock transaction with consideration coming in the form of 1,256,000 shares of RNGR stock (~$8.7M as of Friday’s close) – not sure if any earn-out provisions are included in the purchase price, but seems like a reasonable price for the assets acquired.  Specifically, the RNGR press release references Patriot’s 22 wireline units which will complement the RNGR Mallard fleet, providing an extension of RNGR’s wireline platform into the Bakken, PRB and DJ.  If memory serves correct, Patriot at one point had ~11 CT Units which we believe were 2.375” units.  Not sure whether Patriot still has those units – our last CT census was back in December and the market has changed since then.  The company’s press release reiterated the Q1 comment about a likely second acquisition, thus we would assume another announcement will be forthcoming soon.

Permian Basin BBQ Cook-Off.  Reminder to save the date of September 30th for the 4th Annual Permian BBQ Cook-Off.  We expect to go live with our final sponsorship brochure and website landing page next week.  This should be a fun event and would be a great venue for industry players to profile new equipment designs as we expect a strong showing from the E&P and institutional investment community.   Our Save the Date below highlights committed cooking companies, although we expect to expand this cooker’s list in the coming days.  A special thank you to our early sponsors: Simmons Energy, EnCap Investments, Silvertip Completions, Vulcan Industrial, David deRoode and iNet. 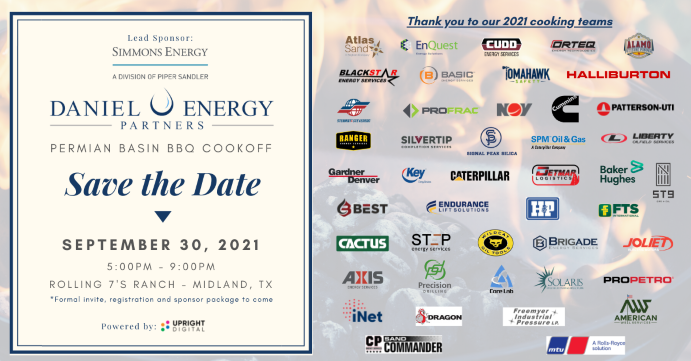 BKR U.S. Land Rig Count: Small w/w gain with the U.S. land rig count up another 3 rigs to 440.  Gains were largely in Oklahoma.

U.S. Well Services.  Revs = $76M vs. $48M in Q4’20.  Adjusted EBITDA = $12M vs. $2M in Q4’20.  Annualized Adjusted EBITDA/fleet = $5.2M, up from $1.4M in Q4.  Averaged 8.8 fully-utilized fleets in Q1 vs. 5.3 fleets in Q4.   Exited Q1 with 11 active fleets: 6 Permian, 3 Appalachia, 2 Eagle Ford.  Averaged 516 stages/fleet vs. 598 stages/fleet in Q4.  Operations were negatively impacted by winter weather which is estimated to have reduced revenue by $5.0 to $5.5M.  Stage counts would have been impacted thus the q/q comp in completed stages/day is skewed.  Capex = $10M.  Net debt = $307M.  Guidance:  Q2 active fleet count expected to range between 9-10 fleets, a slight dip q/q.  Other observations.  Company noted a successful trial with Callon for its electric fleet.  Company has the ability to build/complete 2 additional electric spreads and could have one built by January 1st.  Also, USWS reiterated its intent to be an all-electric company.  Not necessarily a new vision, but it would mean an eventual exit / retirement of the existing diesel fleets. 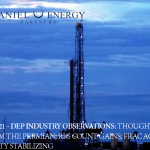 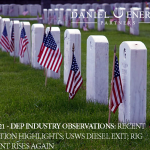