We have returned from another road trip, albeit an abbreviated one as we did a quick three-day Fort Worth / Oklahoma City tour.  Observations captured below.  Tomorrow we drive to Midland where we will be all week doing company updates and field tours.  We return to Midland again the week of August 9th at which time we will host our next Midland reception.

DEP Note Distribution:  We will transition to a new distribution process next Sunday evening.  Please let us know if you do not receive next Sunday’s note.  Fingers crossed the transition goes smoothly.

DUG Permian Takeaways: The DUG Permian/Eagleford conference was well attended with 2000+ industry participants over two days walking around the expo and listening to panel discussions.  Participation from traditional sell-side and buy-side, however, was lacking.  What did we learn?  One leading investment bank mentioned more deals have been done in first six months of 2021, than we saw in all of 2019 and 2020 combined in Midstream and E&P.   Consolidation is likely to continue for the energy sector and there is still a need for massive consolidation in OFS.   Similar to what we heard in Telluride several weeks ago, there are some new players entering the sector to make investments. Several of our contacts at the DUG mentioned that family offices are also new source of capital that is looking to invest as traditional PE and commercial banks are not stepping up to fund deals. Several large E&P companies delivered presentations with the capital discipline narrative continuing to dominate the public company message.  Private companies, meanwhile, continue to drive most of the activity increases for both drilling and completions.  One private Delaware player will go from 4 to 6 rigs by the end of the year (+50%).  One very large E&P had a slide focused on simul frac and tier 4 dual fuel and electric frac.   In fact, this particular company mentioned 95% of their frac jobs in 2021 will be with tier 4 dual fuel or electric frac fleets.   Labor challenges were a frequent comment and remain a major issue for the industry.  Several contacts with whom we spoke mentioned higher wages are needed to attract talent to the industry, but current pricing is making this difficult.

Land Drilling Anecdotes:  As noted last week, we are in the process of updating with our private land drilling friends.  Additional discussions were conducted this week while we will soon hear from their public brethren during Q2 earnings season.  Here are the takeaways.  Rig inquiries remain robust with leading E&P’s set to add more rigs.  Drillers profess an intent to withhold legacy equipment (for now) as pricing remains too low to justify reactivation while finding labor remains problematic.  For one driller, the company estimates a rig reactivation will take ~45 days/rig.  In the case of two drillers, both will be sold out of their super-spec rigs imminently as the last remaining AC rigs go to work within the next few weeks.   Therefore, increasingly it would appear an E&P seeking a Tier 1 rig will need to concentrate procurement efforts on a smaller universe of providers.  This, in our view, means dayrates are poised to inflect, particularly if our rig count projections come to fruition.  On that point, our private land drilling friends acknowledge an intent to raise rates, although their views on increases vary.  One is presently assessing increases of only ~5% whereas another is evaluating increases of potentially ~20%.  The first feels too low while the latter feels a tad aggressive, at least today.  A third driller is also poised to move up rates, believing increases in the 10-20% are realistic.  Leading edge dayrates without any add-on’s are in the upper teen’s according to some, but most expect $20k+ later this year/early next year.

Equipment Auctions:  While in Oklahoma, we attended another Superior Energy Auctioneers event (these folks are really nice hosts).  This auction featured more frac equipment previously owned by BJ Services, including 3 full frac spreads.  Most of the buyers were on-line participants with some equipment sold to buyers in Mississippi, West Virginia and New Hampshire (odd).  A few key observations.  The frac equipment was initially offered in three packages, essentially someone could buy an entire fleet.  No one did, however, thus the equipment was sold piecemeal.  In many cases, prices remain subdued with units selling in the ~$100,000 vicinity.  If one were to collectively add up the values for each pump in the respective fleet package, it would suggest a valuation under $2M/fleet.  On the one hand, one could argue this is seemingly good news for the broader frac market as no one stepped in to buy a full fleet (i.e. new competition).  On the other hand, we do believe a number of these pumps were sold to existing industry participants who are seeking to either expand the fleet and/or use the equipment for spare parts.  Other buyers are frac packagers who will likely buy, refurbish then flip the equipment.  We visited with one pump-down company who listened to the auction, but deferred on any purchases.  This company sees newer equipment as the better alternative, something we’ll touch on next week.  Also buyers wishing to pick up equipment at auction can still be somewhat discriminating as we understand more frac equipment is likely to be auctioned this month.  Separately, another auction took place on July 14th where ~22 Pumpco frac trailers were sold.  We understand this equipment was in rough shape, but still had intact engines/transmissions.  That said, we were advised the average price of these units sold for under $10,000.  Admittedly, we know little about the condition of these specific trailers, but one would think a scrap price may have been better than the actual price we were told.

Frac Capital Equipment:  During our driving tour, we gently trespassed several facilities, including one top-shelf frac packaging player.  Multiple drive-by’s and equipment counts indicate the facility’s bays were more than 50% occupied with all bay doors open.  The parking lot was also full of employee vehicles while a “hiring” sign featured prominently in the front of the facility.  On our last Oklahoma visit in March, all of the facility doors were closed, and the parking lot was relatively empty, thus activity then vs. now is noticeably different.  What also jumped out to us were several new trailer chassis in the bays, indicating either a complete rebuild is underway or perhaps new frac trailers will soon be built.  Admittedly, these are external observations as we didn’t get the chance to go in; however, we visited with another frac packager this past week who is building new trailers.  A basket of the newbuild pumps were sold to private players seeking to expand their respective fleets.  We also learned from one frac contact to be on the lookout for a new frac entrant in 2022 who will enter with emission-friendly equipment (we suspect electric).  Finally, social media posts from Pharaoh Energy Services indicates the company is buying frac equipment.  We believe Pharaoh will operate out of the Mid-Continent region and will likely target vertical fracs.

Wireline Tidbits:  Learned of another wireline deal at DUG Permian as privately held Edge OFS has acquired the wireline assets of Reach Wireline.  This is the third wireline deal in recent weeks.  Meanwhile, social media posts this week indicate Royalty E-Line Services increased its unit count from 6 to 9 – not clear if these are new or used assets.  Finally, industry contacts report a three-unit Permian wireline company recently shut-down operations while we believe a new wireline start-up may be launching soon.   Details to follow later this month.

Select Energy Services:  WTTR jumped into the consolidation game with its purchase of the Superior Energy Services water business, Complete Energy Services.  The transaction includes 3.6M WTTR shares and $14.2M in cash (total value of roughly $35M using the WTTR closing price from July 9th $5.64).  Back in the day, the Complete business was one of the gems within the water disposal market.  It is a sizeable business with operations in multiple basins and over 700 employees.  Moreover, the Complete water business, if memory serves correct, is largely tied to production work, thus this transaction should help provide more balance to the WTTR business profile.   Financial results for the Complete business were not provided, but the opportunity for cost synergies is expected, albeit not quantified.  Importantly, WTTR management called out the need for consolidation as a means to drive industry profitability.  We couldn’t agree more.

NexTier / Seneca Resources Collaboration:  This week NexTier and Seneca jointly announced plans to collaborate on emissions testing.  The partnership will include a study of carbon emissions generated by different frac equipment setups, namely Tier 2, Tier 4, dual-fuel, turbines and nat-gas fueled reciprocating emissions.  We applaud this move as we continue to be confused by differing perspectives on emissions by the various OEM’s / end-users of frac equipment.  However, what’s not clear from the announcement is whether the study will evaluate other emissions besides carbon.  Presumably, emissions such as methane and NOX matter too.  Further, we also want to understand from the study whether the results and recommendations are for just the Marcellus or can we assume the results would apply to other basins?  One comment we regularly hear from industry contacts is the inputs in the study matter (i.e. not all field gas is the same; altitude of measurements, type of frac job/utilization of pumps, etc.). Lastly, we wonder if other Marcellus E&P’s will accept the findings of this study and pursue completion services which match the NexTier/Seneca recommendation.  Despite our questions, the move to standardize emissions testing is a good one and we’re sure our questions will be address in due course. 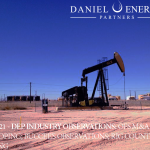