Upcoming Events: We’ll be conducting meetings in the DFW area Monday/Tuesday.  We then drive one of the kiddos to college in North Carolina on Thursday with our drive eventually taking us to Pittsburgh for meetings the following Monday/Tuesday.  If you are in Pittsburgh, let us know as we will host a small social on Tuesday, August 24th in the Canonsburg area.

Permian BBQ Cook-Off:  As some may know, an increasing number of firms cancelled events in/around Houston during OTC/NAPE given the recent spike in COVID cases.  Consequently, DEP received a few inquiries regarding the status of our upcoming Permian BBQ Cook-Off.  Here’s the update.  We added more cooking teams this past week.  We also added additional E&P judges.  Lastly, inquiries from industry constituents seeking to attend/sponsor the event is growing, thus we have zero plans to cancel.

Permian Trip Takeaways:  We conducted another quick trip to the Permian on Monday/Tuesday.  Revelations somewhat lacking, in part because we were there the prior week. Moreover, Q2 earnings season is just wrapping up so most topical issues had already been addressed during the past 1-2 weeks.  That said, private service companies tied to coiled tubing provided anecdotes of healthy price increases with one company claiming it recently took rates up over 20% with leading-edge quotes for 2.375” units now in the mid-$40,000/day vicinity.  A competitor to this CT player confirmed the pricing claim as it reported some customers reaching out for a better price.  The purported response, however, suggests a tad of discipline is beginning to evolve.  Specifically, the CT competitor declined to take work for the lower price even though the company claims it had the capacity to do so.  Rather, the competitor sees the large increase as necessary.  To be fair, this pricing rate-of-change is a bit of an anomaly as we heard from industry contacts tied to wireline and pump-down that no such significant upward movement is underway.  Rather, increases for those service lines remain single digits and are largely made to offset higher costs.  E&P meetings generally reaffirm capital discipline with one private contending stable activity the balance of the year.  Another, meanwhile, sees a ramp in completion activity in 2022 as its rig count is moving up during 2H’21.

Dragon Facility Tour:  With college kicking off next week, we squeezed in a final father/son summer break equipment tour on Friday.  This time we visited the Dragon Products packaging facility in Beaumont.  Now, with OTC just around the corner, we don’t want to steal anyone’s thunder, but we enjoyed learning about current projects underway.  Namely the company is developing its first electric frac design which will feature a 5.5 MW turbine generator.  Additionally, the company is presently building new emission-friendly fleets for a private service company and a sophisticated E&P.  The fleets are outfitted with different engine providers technology, but both are Tier 4 with one offering dual-fuel capability.  The other will feature a new larger engine design which we’ll elaborate more on in a later note.  Further, some of the new pumps will feature Dragon’s DP 4,000hp continuous duty frac pump (~275,000 pound rod load / 8” stroke).  Dragon now has multiple 4,000hp pumps in the field having successfully undergone field trials.  As a result, more of the pumps likely hit the market in the coming quarters.  In addition to packaging frac equipment, the Dragon facility is also used to build new electric water transfer units.  Dragon introduced these units in 2018/2019 with some buyers including Tier 1 E&P’s.  During our tour, multiple packages were being finalized and preparing for deployment.  Also, the facility regularly refurbs and then resells pump down units with most buyers being small private pump-down companies.

New Wireline Provider.  Several weeks ago, we alluded to a new wireline provider.  Now, this provider is about to go operational within the next 1-2 weeks.  The company, Pintail Completions, is founded by an industry player who previously built a successful wireline company.  Initially, Pintail will be Permian-focused with plans to deploy at least four units over the next few months.  These units, however, are unique as they will be dual fuel capable.  The Pintail-owned technology provides an opportunity for E&P customers to capture fuel savings and reduce emissions.  Also, it’s a convenient solution for those E&P companies who don’t have a power source to run an electric unit.  In time though, Pintail expects to diversify with electric wireline units.

E&P M&A Continues.  Consolidation within the E&P sector continues with CHK announcing its agreement to acquire Vine Oil & Gas.  The combined company creates the leading public Haynesville E&P company with plans to eventually run upwards of ~6+ rigs in the region.  Separately, SilverBow Resources announced the acquisition of roughly 45,000 net acres in the Eagle Ford for $33M.  Not sure who sold that acreage yet, but the theme is clear:  E&P’s are scaling up and cutting costs.  These deals should serve as a reminder to the oil service sector that a similar consolidation wave is needed since the OFS sector needs to similarly cut costs but use its scale to obtain a pricing construct that allows for FCF and positive shareholder returns.

Labor Anecdote:  Stories of driver shortages are not new news, but this weekend a friend showed us a picture of an East Texas frac job.  Our friend visited the job site this week, so the photo was very recent.  It shows a near-entire fleet on site working, but there were only three tractors assigned to the pump trailers, thus most of the pump trailers were pumping with no attached tractor.  Turns out the company can’t find drivers, so it allocated three tractors/drivers to move an entire fleet.

USWS: Averaged 9.3 active fleets in Q2 with an average of 7.9 fully utilized fleets in Q2.  The company exited Q2 with 7.0 active fleets, which includes 5 electric fleets.  Recall, USWS is exiting the diesel market.  For Q3, the company expects to average 5-6 fleets, reflecting the continued exit from conventional diesel.  USWS intends to build four new electric fleets (the Nyx Clean Fleet design) while Pro Frac Services has exercised its license to build three fleets.  Deliveries of the USWS fleets will begin in Q1’22 – recall our comments about lead times from prior epistles.  Right now, the emission-friendly market (which we define at Tier dual fuel, electric and direct drive turbine) is effectively sold out.  USWS has long contended the electric fleets have lower maintenance costs than traditional diesel.  Company reiterated this claim stating the company’s maintenance expense on a per pump hour basis declined 7% q/q (a reflection of the greater electric mix).  Also, the company’s new Nyx fleet design will feature 10 trailers, each rated to 6,000hp.

STEP.CN:  Running 2 crews in the U.S. with plans to reactivate a third crew in Q3.  The company’s U.S. division, which includes coiled tubing and frac, generated Q2 adjusted EBITDA of C$1.0M, an improvement from negative EBITDA in Q1.  The company does not breakout frac vs. CT EBITDA, but it does disclose revenue by product line.  For the frac business, Q2 revenue totaled C$34.4M vs. C$27.5M in Q1.  Revenue per operating day improved from $122,575 to $130,384, a function of job mix and pricing.  Operating days nudged higher in Q2 to 146 vs. 134 in Q1.  STEP reports some pricing traction in Q2 and sees a bit more in 2H’21.

As usual, this note is not intended to provide investment recommendations or advice.  Rather, it’s our thoughts and observations on the industry. 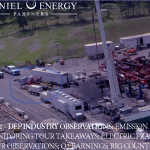 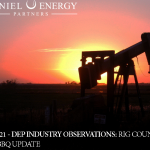